Gun Crime and in Philadelphia and Norfolk Virginia is the result of government policies. The refusal to protect poor non-whites from criminals in their community leads to death and mayhem.

Philadelphia has a massive black-on-black and black on everyone else crime problem. Officials believe arresting non-white criminals is racism.

Many crimes tend to ignored or pleaded down to nothing. They range from shop-lifting to illegal gun possession.

April Coleman paid the price to keep minority criminals out of jail. A black male killed her after some petty argument. He likely had a long criminal record. The press seldom identifies race, sex, shooters or victims.

Philadelphia (CBS) June 15, 2019 - A 38-year-old mother of five (April Coleman) was the victim of a deadly shooting inside a North Philadelphia deli...she was not the intended target. "Whatever happened, it was the argument with her boyfriend and the other guy...The guy opened fire. It was meant for him, but it hit her."

Police say there was a large crowd in the deli and an argument. They say a man fired a few shots inside the store from the Cecil B. Moore Avenue side. One of them struck Coleman in her head.

By the time the weekend was over, the number of shootings had risen to 19 with 28 victims, including five dead. The shootings took place on a playground, inside a deli, at a graduation party, and seemingly everywhere in between.

Would anyone like to guess the race of the shooters and victims? The shooters likely black. If white their identity and race would be front page news.

Black people die at the hands of blacks. Politicians worry over white supremacy. If only they could find one. The press continues to censor the facts and print lies.

The police describe her killer as,

The gunman was described by authorities as a black man who was seen wearing black jeans and a black hooded sweatshirt with plaid inner lining.

What happens when a community elects a George Soros backed criminal reformer? You get Larry Krasner.

Here in Virginia the Democratic Party gained control of the state. They want criminal justice reform. They want to disarm white rural residents.

Criminal justice reform is about race. How to stop jailing so many black-Latino criminals. Krasner can provide the example they seek.

Krasner believes the police are "systemically racist." What do statistics say about Philadelphia gun crime? Who commits the crimes?

Domestic violence that liberals make a big deal of at 19 or 6.9%.

The color of gun crime in Philly is black/Latino at 95.5%.

Conclusion: gun crime is black/Latino crime. As the Hispanic population grows so does more violent crime.

WesternJournal.com notes (May 21, 2019) illegal aliens commit 42.7% of federal crimes. Non-citizens make up 7% of the population.

Conclusion: until we come to grips with race gun crime and all crime will increase. 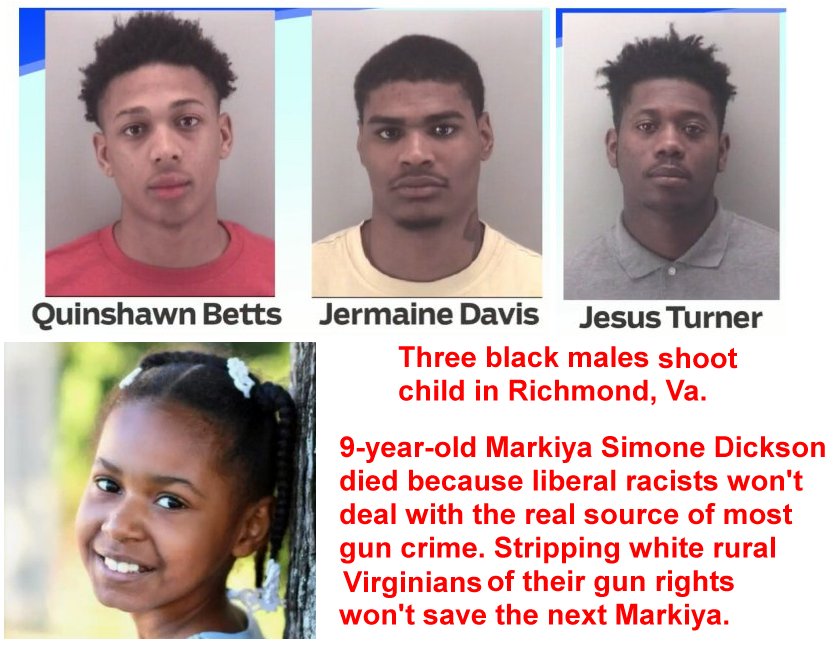 I've worried for years they would turn us into a California hell and it is here. Many Southwest Virginia residents won't stand for it.

I live in Washington County, Virginia. Our board of supervisors has voted us a gun sanctuary county. I'm a gun owner with concealed carry permit. So are a lot of people in my region.

We have the lowest crime rates in the state and the highest concentrations of gun ownership. Yet politicians continue to blame guns for violence.

One demographic group commits most of the gun violence and violent crime in general.

A black Democrat politician complained "people of color" suffer from gun violence. He is from in Norfolk.

That is very true. but not from so-called "assault weapons". In most cases it is illegal handguns in the possession of black criminals.

Tazewell County voted to form a militia to protect citizen rights. It has per-capita many times the guns of Norfolk. But Norfolk has 80-90 times the violent crime of Tazewell County.

Norfolk is 42% black; Tazewell County is 96% white. This cold hard fact is everywhere.

Tazewell County like Southwest Virginia is among the poorest places in the state. Poverty has little to do with crime.

Crime is proportional to diversity, culture, and politics.

They don't want to offend their voter base. They instead turn on and scape-goat poor and working class whites.

White liberals are more racist towards other whites than blacks or Hispanics.

Black children are being shot everyday by other blacks. White liberals tag their opponents as white supremacists.

Newspapers such as the Virginian-Pilot it seems every other day a black face turns up for some gun crime.

Same in Richmond, Danville, and Roanoke. The higher the diversity level, the higher the rate of gun crime, violence.

Most of the time it is innocent blacks murdered. Rich white liberals yell about white supremacists from their gated communities.

The following are gateway pages to my three websites.

Web site Copyright Lewis Loflin, All rights reserved.
If using this material on another site, please provide a link back to my site.